A key aim of Sciencebite is to create a open platform for scientific expertise online. At the moment, Sciencebite is much smaller than the academic social networks, academia.edu, researchgate.net and mendeley.com. So I wondered how scientists behave on these networks, how they are promoting their identities, publications and expertise, and how they are connecting with each other.

Without wishing to comment on the competitive positions of the three largest academic networks, in this part of the world – Berlin – where I am based, ResearchGate is the one that we hear about the most, and with a claimed user count of > 6m academics from whitelisted institutions, it has certainly achieved an amazing penetration of the world’s academics. Speaking personally as someone with a background in academic science, I can confirm that every scientist that I know now seems to have a ResearchGate profile, although many do not actively engage with it.

So how are scientists behaving online, taking ResearchGate as the source of data? I wrote a script to browse ResearchGate profiles at random, and ran it twice, to look at the change over a year: firstly in November 2013 (sampling 3028 profiles), and secondly in February 2015 (sampling 3407 profiles). The sample represents some 0.1% of ResearchGate profiles, and leads to some pretty interesting conclusions about how scientists behave on the new internet platforms.

ResearchGate has 6m users as of January 2015, and is currently growing at around 10k users per day. A growing minority of users share their professional identity on the site (Figure 1): 36% shared a profile picture in 2013, 43% in 2015. Fewer have updated their profiles with their current positions, but this too is growing: 7% in 2013 and 24% in 2015. It’s interesting that fewer have filled in a current position than uploaded a profile picture, which perhaps reflects that many users register with Facebook, or have left academia since joining ResearchGate. As of February 2015, 18% have both uploaded a profile picture and filled in their current position. If we consider this as a definition of an active user, we can estimate ResearchGate’s active user base as 1.1m. 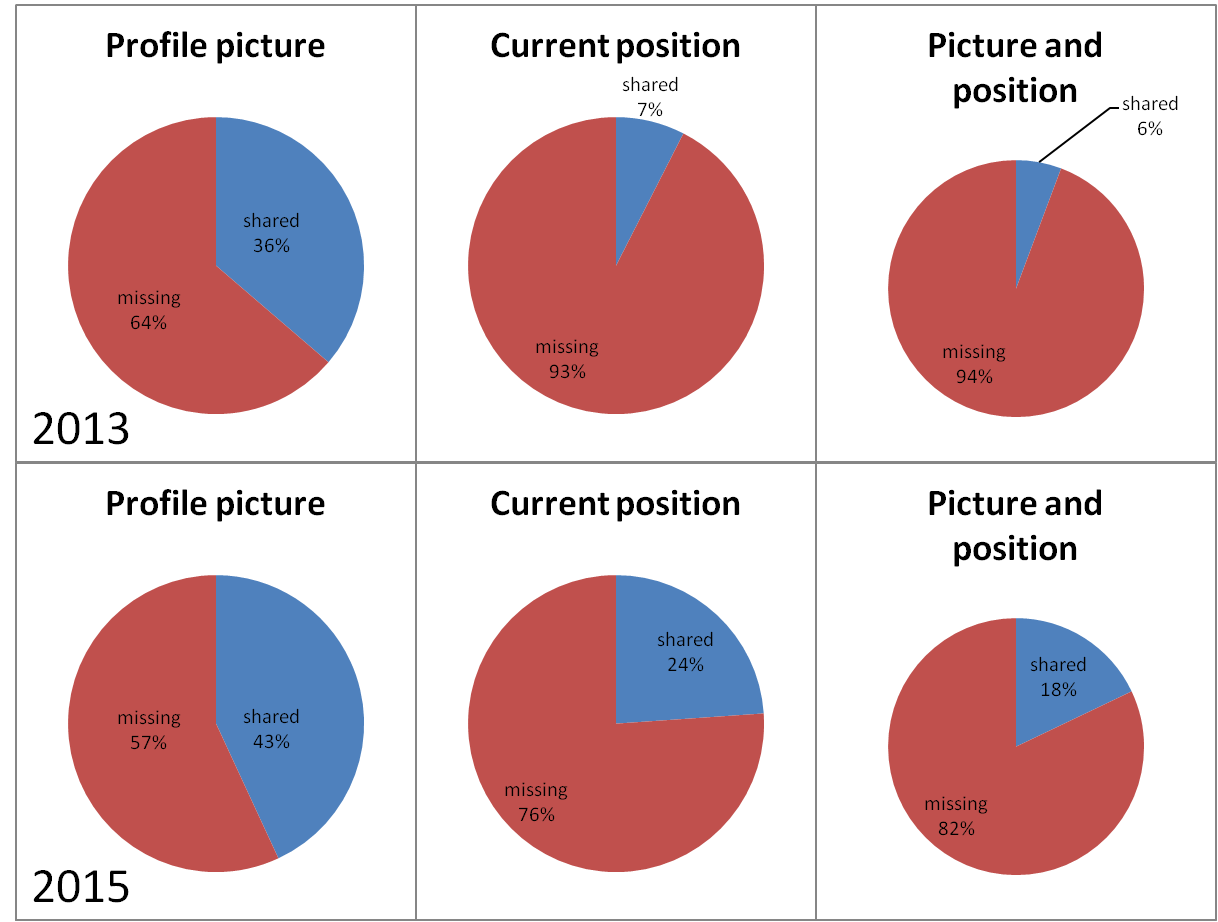 We see an impressive engagement with sharing full texts of publications online (Figure 2). Some 41% of ResearchGate users had uploaded at least one full text by Nov 2013, growing to 80% by Feb 2015. Considering the rapid growth of ResearchGate signups in this time, it reflects an impressive rate of sharing among new users.

Figure 2: publication uploading on ResearchGate has achieved an amazing penetration of the academic community. Now 80% of RG users have uploaded at least one full text.

It’s remarkable that so many more users have shared their publications (~3m) than filled in their profile information (~1m). However, given the importance of publications in the academic career path, it is perhaps less surprising: academics find it more important to share publications than to display their current position. This would surely be the opposite of user behavior on mainstream professional networks like LinkedIn.

Figure 3: the growth in shared full texts on ResearchGate reflects the amazing penetration of the academic community in recent years. Now almost 50% of new publications are shared openly as full text.

ResearchGate launched a new feature in March 2014: Open Reviews, for scientists to openly peer-review each others’ papers after publication, for quality, originality, reproducibility, etc. Unfortunately almost nobody is using it. Only 4 users in my sample of 3407 have given an Open Review, and none came back to give a second.

The reason for this low adoption is probably that scientists get little career advancement from an Open Review. If they give a negative review, they may make enemies, and they gain none of the influence over a journal that they do in the traditional peer review system. Moreover, if they give a positive review, it does not help their publication and citation record, which are their main criteria to advance their careers.

Sharing of knowhow and advice is still lacking

Far fewer users engage with the Q&A forum on ResearchGate, in comparison with their sharing of publications (Figure 4). In November 2013, only 6.3% had ever asked, commented on, or answered a question. Even of those who had engaged with Q&A, very few were repeat users: 2.3% had ever asked a question, only 0.56% had come back to ask a second question, and only one in the entire sample could be really classified as an active user by asking more than 10 questions.

The situation had not improved much by February 2015. 6.6% had even asked/commented/answered. 2.8% had ever asked, and 1.1% had ever come back for a second. No users in the sample had asked more than 10 questions.

Why do so few scientists request and share practical knowhow and advice online? Perhaps it is the secretive culture of research, and the importance of publications versus other types of dissemination. Perhaps it is also because of the highly specialized nature of knowhow in science – valuable knowhow is often much more specialized than in other professions, for example in software development, where programmers enjoy a culture of sharing all kinds of practical information, through open source software, blogs and Q&A sites.

Figure 4: knowhow sharing on ResearchGate is still minimal. Only a very small proportion of users use the Q&A, and this proportion has changed little in 2013 – 2015

Conclusion: scientists are changing some of their habits, but only as far as the academic career path allows them

Great numbers of scientists are now sharing online, and in the past couple of years, it has become common to share publications openly on academic social networks like ResearchGate. However, not many scientists have changed their behavior beyond this – other types of sharing are still lacking, In particular, sharing of expertise and knowhow is still minimal.

I believe this represents a great challenge and opportunity to scientists who are interested in working differently. The trend of online sharing among scientists still overwhelmingly reflects the traditional academic career path, because it so strongly anchored to journal publications and citations. For all the frustrations of collaborating and making progress in science, there are perhaps still a great number of undiscovered solutions that would allow us to work together better.